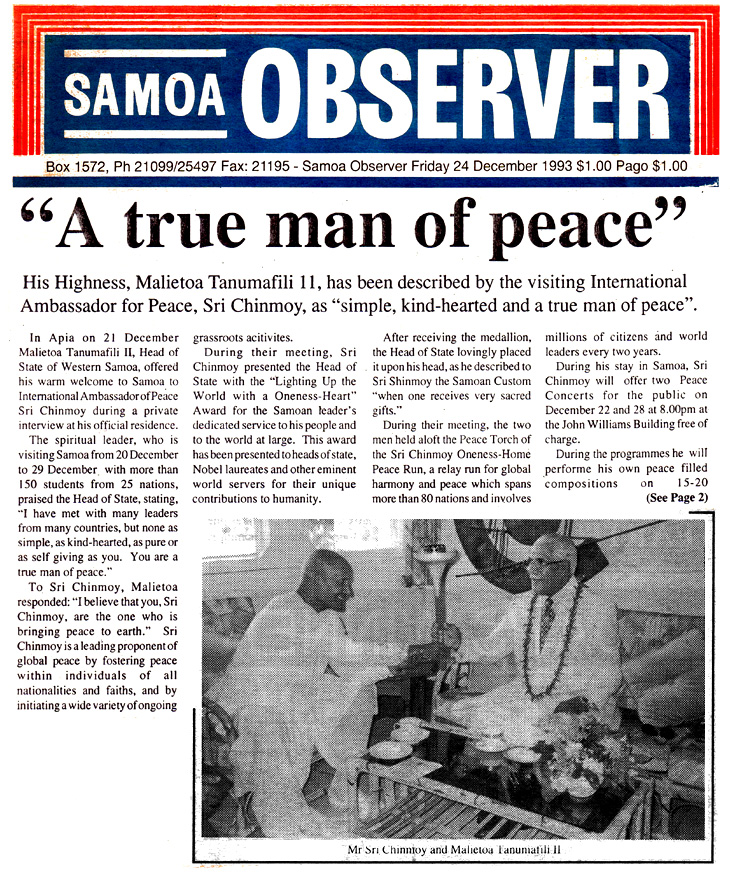 “A true man of peace”

His Highness, Malietoa Tanumafili II, has been described by the visiting International Ambassador for Peace, Sri Chinmoy, as “simple, kind-hearted and a true man of peace”.

In Apia on 21 December Malietoa Tanumafili II, Head of State of Western Samoa, offered his warm welcome to Samoa to International Ambassador of Peace Sri Chinmoy during a private interview at his official residence.

The spiritual leader, who is visiting Samoa from 20 December to 29 December, with more than 150 students from 25 nations, praised the Head of State, stating, “I have met with many leaders from many countries, but none as simple, as kind-hearted, as pure or as self giving as you. You are a true man of peace.”

To Sri Chinmoy, Malietoa responded: “I believe that you, Sri Chinmoy, are the one who is bringing peace to earth.” Sri Chinmoy is a leading proponent of global peace by fostering peace within individuals of all nationalities and faiths, and by initiating a wide variety of ongoing grassroots activities.

During their meeting, Sri Chinmoy presented the Head of State with the “Lighting [Lifting] Up the World with a Oneness-Heart” Award for the Samoan leader’s dedicated service to his people and to the world at large. This award has been presented to heads of state, Nobel laureates and other eminent world servers for their unique contributions to humanity.

After receiving the medallion, the Head of State lovingly placed it upon his head, as he described to Sri Chinmoy the Samoan Custom “when one receives very sacred gifts.”

During their meeting the two men held aloft the Peace Torch of the Sri Chinmoy Oneness-Home Peace Run, a relay run for global harmony and peace which spans more than 80 nations and involves millions of citizens and world leaders every two years.

During his stay in Samoa, Sri Chinmoy will offer two Peace Concerts for the public on December 22 and 28 at 8.00pm at the John Williams Building free of charge. 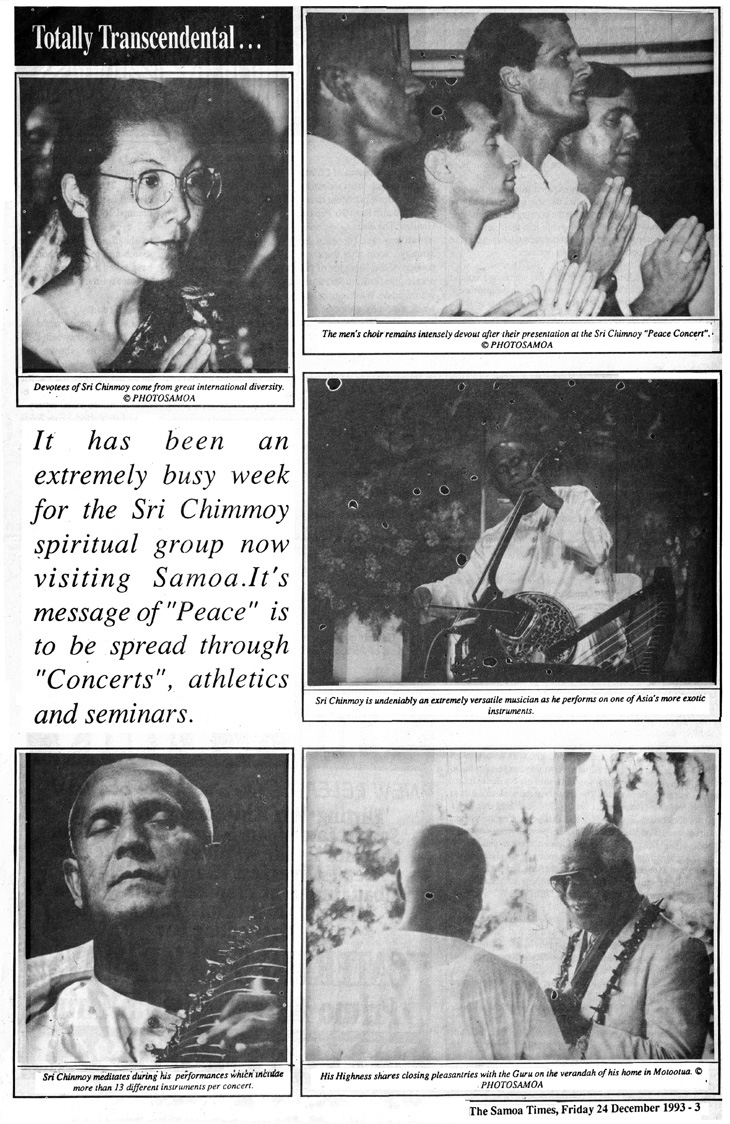 It has been an extremely busy week for the Sri Chinmoy spiritual group now visiting Samoa. Its message of “Peace “ is to be spread through “Concerts”, athletics and seminars.

• Sri Chinmoy meditates during his performances which include more than 13 different instruments per concert.

• The men’s choir remains intensely devout after their presentation at the Sri Chinmoy “Peace Concert”. © PHOTOSAMOA

• Sri Chinmoy is undeniably an extremely versatile musician as he performs on one of Asia’s more exotic instruments.

• His Highness shares closing pleasantries with the Guru on the verandah of his home in Motootua.
© PHOTOSAMOA 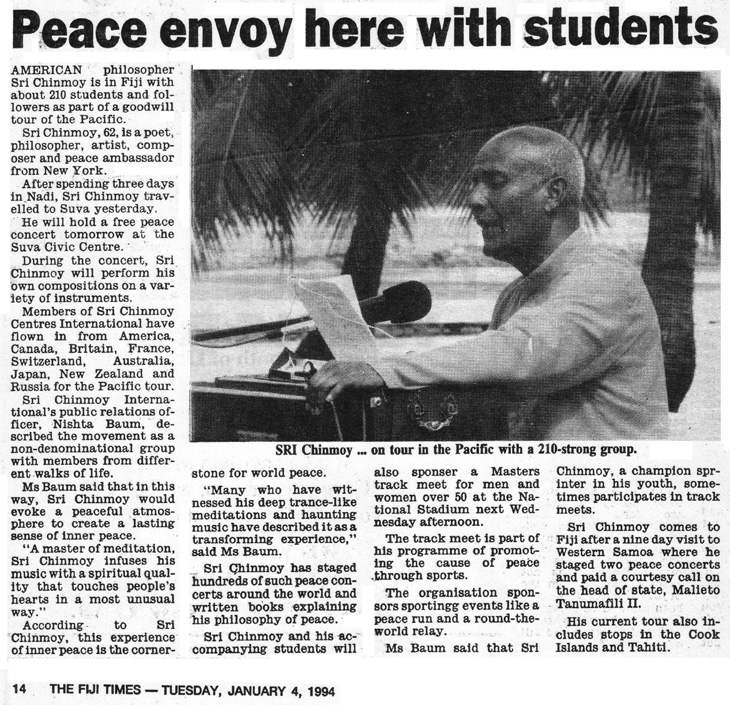 AMERICAN philosopher Sri Chinmoy is in Fiji with about 210 students and followers as part of a goodwill tour of the Pacific.

He will hold a free peace concert tomorrow at the Suva Civic Centre.

During the concert, Sri Chinmoy will perform his own compositions on a variety of instruments.

Ms Baum said that in this way, Sri Chinmoy would evoke a peaceful atmosphere to create a lasting sense of inner peace.

“A master of meditation, Sri Chinmoy infuses his music with a spiritual quality that touches people’s hearts in a most unusual way.”

According to Sri Chinmoy, this experience of inner peace is the cornerstone for world peace.

“Many who have witnessed his deep trance-like meditations and haunting music have described it as a transforming experience,” said Ms Baum.

Sri Chinmoy has staged hundreds of such peace concerts around the world and written books explaining his philosophy of peace.

Sri Chinmoy and his accompanying students will also sponsor a Masters track meet for men and women over 50 at the National Stadium next Wednesday afternoon.

The track meet is part of his programme of promoting the cause of peace through sports.

The organisation sponsors sporting events like a peace run and a round-the-world relay.

Sri Chinmoy comes to Fiji after a nine day visit to Western Samoa where he staged two peace concerts and paid a courtesy call on the head of state, Malietoa Tanumafili II.

His current tour also includes stops in the Cook Islands and Tahiti.

Caption: Sri Chinmoy ... on tour in the Pacific with a 210-strong group. 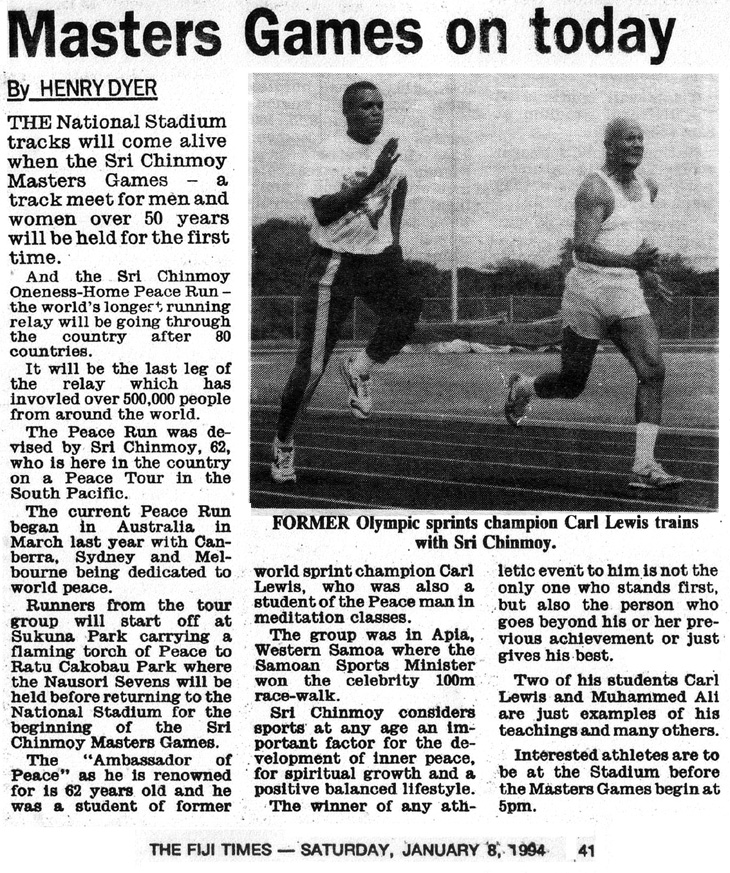 THE National Stadium tracks will come alive when the Sri Chinmoy Masters Games – a track meet for men and women over 50 years will be held for the first time.

And the Sri Chinmoy Oneness-Home Peace Run – the world’s longest running relay will be going through the country after 80 countries.

It will be the last leg of the relay which has involved over 500,000 people from around the world.

The Peace Run was devised by Sri Chinmoy, 62, who Is here in the country on a Peace Tour in the South Pacific.

The current Peace Run began in Australia in March last year with Canberra, Sydney and Melbourne being dedicated to world peace.

Runners from the tour group will start off at Sukuna Park carrying a flaming torch of Peace to Ratu Cakobau Park where the Nausori Sevens will be held before returning to the National Stadium for the beginning of the Sri Chinmoy Masters Games.

The “Ambassador of Peace” as he is renowned for is 62 years old and he was a student of former world sprint champion Carl Lewis. who was also a student of the Peace man in meditation classes.

The group was in Apia, Western Samoa where the Samoan Sports Minister won the celebrity 100m race-walk.

Sri Chinmoy considers sports at any age an important factor for the development of inner peace, for spiritual growth and a positive balanced lifestyle.

The winner of any athletic event to him is not the only one who stands first, but also the person who goes beyond his or her previous achievement or just gives his best.

Two of his students Carl Lewis and Mohammed Ali are just examples of his teachings and many others.

Interested athletes are to be at the Stadium before the Masters Games begin at 5PM.

Talk Of The Town

Related article: A Journey to the South Seas