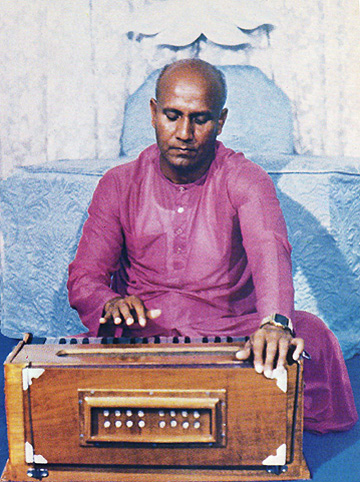 Sri Chinmoy sits on the floor in his meditation room playing the harmonium. Around him are strewn a few of his old notebooks from the Ashram from which he chooses the poems to set to music. He is lost in the very private, personal world of musical creativity. Diligently trying out numerous musical phrases to a particular line of poetry, he plays his harmonium quickly, until he decides that he has captured the essence of the words he is working with. He notates the musical passage in his native Bengali notation and immediately starts to work on the next line of poetry. He composes with complete freedom and spontaneity, his main concern being that the music perfectly embodies the consciousness of the Bengali poetry. Gradually the songs emerge, joined together by unexpected intervals and beautiful glissandos which glide by so gently and gracefully that one is immediately lifted to that higher plane of consciousness where the outer sound is transformed into inner bliss, and the listener becomes surcharged with the ever-increasing flow of divine nectar which floods the Master’s entire existence.

The music of Sri Chinmoy embodies a variety of characteristics which apply to his entire repertoire of vocal music. The most predominant aspect of the Master’s style is constant motion. It is rare that one note will receive enough durational emphasis to result in its implication as a tonal center (although combinations of notes often imply tonal centers around Db and Gb). Whether the song is diatonic or whether accidentals are introduced, whether the song is strongly rhythmic or sweetly flowing, whether there are unusual intervals or the simplest stepwise phrases, there is always a sense of moving from one place to another. Both rhythmically and melodically, Sri Chinmoy’s songs draw their life from a constant sense of motion. This primary characteristic includes all the other aspects of the Master’s music.

The most important quality of this motion is that it is, by and large, ascendant motion. Ascending scale-wise movement dominates the repertoire. Sri Chinmoy usually starts a song on Db, Gb, F or Ab and immediately ascends to a higher note. A study of the starting notes in the 99 songs from the collection Supreme, Teach Me How to Surrender songbook shows that 24 songs begin on the note Db. In 21 of those 24 cases, the note following Db is the next higher whole step: Eb. The three songs which did not contain this scale-wise motion did leap to a higher note: twice to Gb, and once to Bb. It may be wise to note that the ascending melody, a natural characteristic of Sri Chinmoy’s style, is the natural embodiment of spiritual aspiration and the inner cry for a higher and more fulfilling existence. It symbolizes the untiring effort on the part of the spiritual seeker to continually transcend himself.

Sri Chinmoy’s songs are generally linear in form. They rarely employ what could be called a conscious use of compositional technique. One always gets a sense of freedom in the Master’s music, and never rigidity. It is interesting to notice, therefore, the very precise form the Bengali poetry adheres to. The great majority of the poems are metrically consistent and rhyme in couplets. For example, the rhyme scheme of “Tomar Adesh” is AA, BB, CC, A’:

I shall listen to Your Command, I shall.
In Your Sky I shall fly, I shall fly.
Eternally You are mine, my very own.
You are my heart’s wealth.
For You at night, in tears I shall cry.
For You at dawn, with light I shall smile.
For You, for You, Beloved, only for You.

Looking at the music, we find that the two lines set to the first two lines of the poem are identical. The symmetrical structure AA, BB of the text follows through perfectly with a melodic AA, BB pattern in the song. The tendency toward symmetry already established carries into the last part of the song. In the third line, Sri Chinmoy starts the musical phrase in the same way as the preceding two phrases, but after two notes he continues with the figure

until the pause C#’, and then he completes the phrase with a complementary phrase identical in rhythm to the one which precedes it. “Tomar Adesh” is, therefore, an example of how the form of the text suggests the form the melody will take. This is not a common practise of the Master, but yet certain examples, usually on a smaller scale than this example, do exist.

Most often it is the sense, or consciousness, of the poem that determines how the melody will turn out. The words carry the message for the ears to hear, and the music breathes life into the words for the soul to feel. “Tomar Hasi Bhalobasi” is a good example of Sri Chinmoy’s representation of the spiritual qualities of the text in music.

For the line “Tomar charan bhalobasi” (“Your Feet I love”), Sri Chinmoy has begun his phrase on the low C#, representing the humble bow of the seeker when face-to-face with the Supreme. In addition, the C# signals the locrian mode which, because of its harmonic instability, may represent humility in the presence of God. The phrase “Pratikhane bhalobasi” (“At every moment I love You”) begins on a low D and leaps an octave to d’ for the line “Prabhu tomai bhalobasi” (“O Lord Supreme, I love You”), which introduces the climax of the song. The low register of the phrases containing references to the body and the feet is entirely called for in this instance, since the body is the lowest part of the seeker’s existence, and the last part to be illumined, and since the humble person traditionally approaches a holy man in India by touching his feet.

Although one rarely finds evidence of melodic development in Sri Chinmoy’s songs, there is a constant tendency to develop the various rhythmic motifs of any given song. In “Ogo Sundara”, for example, Sri Chinmoy begins the song on a c’ and he establishes the motif ‘A’ which repeats three times.

O my beautiful One, O my Lord of Delight,
O Lord of my life-breath,
In the finite and the Infinite I have met
Your Universal Consciousness.
I shall play on the flute of transformation-light
In the forest of my heart.
Smiling and dancing I shall lose myself
In the wealth of Lord Krishna.

This repetition of an established motif is common throughout the Master’s songs. One may pause for a moment to reflect on Sri Chinmoy’s illumining philosophy, which speaks of the soul as being the ‘divine child’ within, which has unfortunately been covered over in the process of our growth and, therefore, cries to be heard. The utter simplicity of the motif and its subsequent repetition elicits a response from our own divine ‘child-soul’, just as a child singing some favourite rhyme over and over can touch our hearts in a simple yet profound way.

In the following phrase, Sri Chinmoy stays with the c’, creating motif ‘B’, where he repeats the rhythmic pattern

using substitute pitches. Motif ‘C’ is created, which consists of

, borrowed from the first motif. He repeats the pattern

(‘hriday bane’), but this time he substitutes segments from motif ‘B’

before ending the phrase as an extended form of motif ‘A’.

Here one finds a natural compositional form and structure in Sri Chinmoy’s music. The various rhythmic motifs unite the song as an organic whole in the way they emerge out of and elaborate on each other.

Often the Master establishes a set meter, such as in “Basana Hase”, where the motif is repeated

is repeated three times and could easily be manipulated to serve as a cadence, but the phrase is disrupted at the cadence in such a way that the metrical balance of the phrase is upset. The metre is established in 3/4 and the cadence

upsets the flow. In the second phrases, the motif is quite different –

– and it is repeated six times, but the figure

at the cadence disrupts the flow:

My desire smiles and my desire cries.
My desire loves the sweet smile
Of the goddess dawn
And the darkness
Of dark night.
I know not how and why
My aspiration-flame is climbing up
To reach the skies.
I know in a twinkling
My desire-world
Will come to its final end.

There are many rhythmic similarities between “Basana Hase” and “Nai Kicchu Nai”:

Mother, do You not love me
Just because I have nothing to offer You?
Do You love only those
Who are blessed with striking capacities?
Mother, I do not want to be a man of virtues or capacity;
I want to remain a fool.
Although You bless me not with Your smile divine,
I claim myself Your fondest child.

In “Nai Kicchu Nai”, one can easily follow the simple scale-wise passage. Likewise in “Shubhra Akash”, the same pitches used in “Nai Kicchu Nai” appear, but in a different rhythmic pattern: