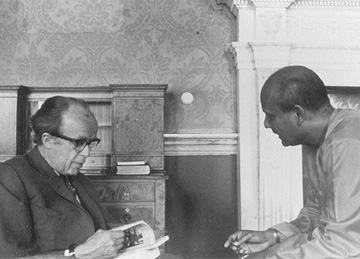 President Childers of Ireland leafs through a book presented to him by Sri Chinmoy.

Dublin – An Indian Guru and an Irish politician exchanged views on meditation last month as Sri Chinmoy met with President Erskine Childers of Ireland in the President’s Palace here.

It was Sri Chinmoy’s second visit to the presidential palace. Like last year, when he conferred with then-President Eamon de Valera, the meeting came in the course of one of the Master’s European lecture tours.

President Childers told the Indian Master that he, too, believes in meditation. “But as President, I am not in a position to talk to people about meditation.” So, he explained, he speaks to them “about what I call relaxology, which is essentially the same thing as meditation.”

“When I say this,” he continued, “the teachers – often priests or nuns – clap or sometimes just smile. But no one has felt the real importance of putting it into practice.” Sri Chinmoy explained that the President was doing a form of meditation in serving his country. “Your heart is doing things that your mind is not yet aware of,” Sri Chinmoy said, pointing out that “when you serve your country and your people, you are serving God inside those people.”

He told the President that there is no feeling of sacrifice in this kind of service because it is inspired by a feeling of oneness and love. “You are offering your love to the Source, and the Source is God.”

Before Sri Chinmoy departed, President Childers brought out a book of spiritual writings that had been collected by his grandmother. “I was looking through it this morning, to try and find something to read you from it,” he said.

Then the Irish President read out to the spiritual Master a poem about a Bodhisattva who began meditating one evening and achieved enlightenment at daybreak.

Note: Anahata Nada was the longest-running newsletter of the Sri Chinmoy Centre. It was first published on January 1, 1974, and chronicled Sri Chinmoy’s life and activities for over three decades until 2007.