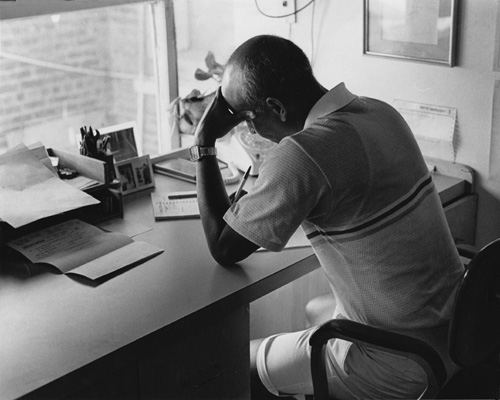 When it came to correspondence, Sri Chinmoy seemed to belong to another era. He placed great value on written communication with his friends and acquaintances, rarely missing a birthday or important occasion in their lives, and he derived immense joy from their letters to him in return. Usually he dictated his letters to an assistant. Then he would embellish the typewritten originals with his handwriting and birds and even spelling corrections. Sometimes he revised the draft a number of times before he was satisfied with it. On rare occasions, he would write letters using longhand, but of these, sadly, few copies were made. He dictated his letters to a number of his students, including Chidananda, Agraha, Nishtha, Nilima, Nemi, Sanjay and Vidagdha, and so it is difficult to make any accurate estimation of their volume. I believe it would run to several hundred letters per year. Most of these letters are on the letterhead of ‘Sri Chinmoy: The Peace Meditation at the United Nations’. In my case, and also in the case of Nishtha, Sri Chinmoy encouraged us to use old-fashioned Canon or Brother portable ribbon typewriters and specified that we should not spend more than $100 to purchase them. We only relinquished these in 2007 when replacement ribbons were no longer available. This section presents a brief and necessarily incomplete selection of Sri Chinmoy’s letters over the years.