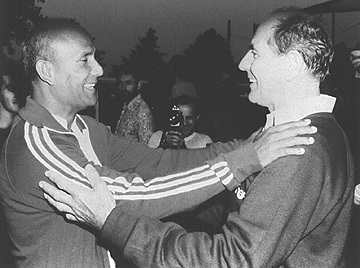 Dozens of other disciples, who didn’t run, assisted the race organisers before and during the run.

A group of disciples also added a touch of musical dynamism to the scene by singing several of Sri Chinmoy’s running songs over the loudspeaker just before the race began.

Prior to the start, Sri Chinmoy chatted with ultramarathoner Don Ritchie and Olympic triple gold medalist Emil Zatopek, who served as Grand Marshall of the New York Marathon.

Sri Chinmoy had met Ritchie this past June when the runner visited his spiritual Centre after setting a new world record in a 100-mile run in Flushing Meadow Park.

For Zatopek, the only athlete ever to win three gold medals for the 5,000-metre run, 10,000-metre run and marathon in a single Olympics (1952), it was his first introduction to Sri Chinmoy, whom he had heard a lot about.

“This is the best blessing I ever had,” he told the Master. Sri Chinmoy, who regards running as a physical complement to the inner life, normally trains about 80 miles a week. The New York marathon was his sixth this year.

Only two weeks earlier, he had run the historic ‘Marathon to Athens’ marathon in Greece.

Anahata Nada is the longest-running newsletter of the Sri Chinmoy Centre. It was first published on January 1, 1974, and has chronicled Sri Chinmoy’s life and activities for over three decades.