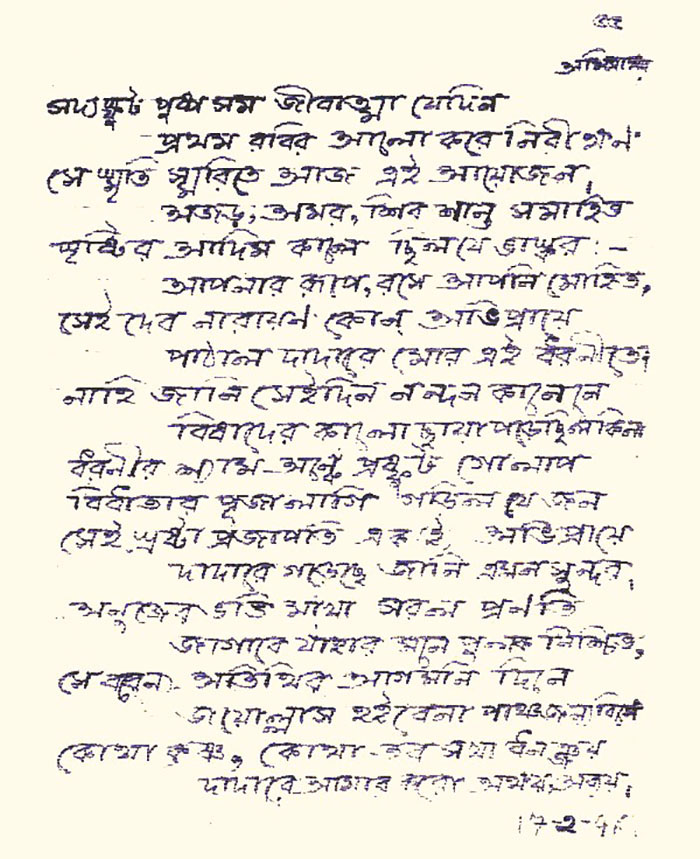 The day my fresh unblossomed soul-flower
Observed the first rays of the Sun –
Today’s arrangements are in remembrance of that memory.
Ageless, immortal, auspicious, peaceful, engrossed in meditation
One who was illumined since the beginning of creation:
Who remains enchanted in His own self-beauty
That Lord Narayana in a certain contemplation
Sent my elder brother1 into this world.
Not sure if on that day in Paradise
The dark shadows of melancholy were cast or not
The blossoming roses in the lap of the dark cloud-hued Earth
Those who harvested for the worship of the Creator
That Creator Prajapati in similar contemplation
Created my elder brother, I know, such beautiful.
The devotion-imbued simple obeisance of the younger brother
Will definitely awaken delight in the heart of
That honourable guest’s auspicious day of arrival
When the celebration will be sans the sounds of the Panchajanya conch.
Where are you Krishna, where is your dear friend Dhananjoy?2
Do make my elder brother and me endless and changeless.

This is a facsimile of a poem written by Sri Chinmoy on 17 February 1946, when he was fourteen years old.

1 We are grateful to Rintu for offering a translation for this very lofty tribute by Sri Chinmoy to his elder brother. The question of which elder brother is being referred to is perhaps partially solved by the pet name the poet uses to refer to him. “Dada”, meaning elder brother, is what the young boy called his eldest brother Hriday; whereas he called Chitta “Madhyamda”, meaning middle brother, and Mantu was “Tunuda”, little elder brother.

2 At several points in the Bhagavad Gita, Lord Krishna addresses Arjuna as Dhananjaya. The epithet means, “the one who conquers wealth.”