The Birth of a New Creation

The Keyboard Music of Sri Chinmoy
by Prachar Stegemann 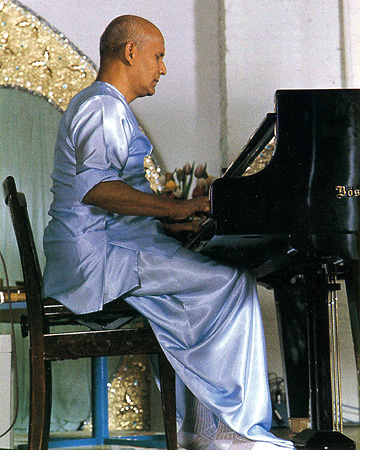 "I dare any sensitive man or woman to remain unmoved by this music." – Conductor lsaac Karabtchevsky had just heard Sri Chinmoy playing the pipe-organ.

Sri Chinmoy is better known as a meditation teacher, poet, composer, painter, athlete, weightlifter, for his worldwide Peace Concerts, and as Director of Sri Chinmoy: The Peace Meditation at the United Nations.

He recently took up keyboards, with stunning results.

On the 18th of February 19871 , Sri Chinmoy first sat at a piano and spontaneously improvised for 2½ minutes. Of course he has had no formal training; he does not read music.

Four days afterwards at a concert in New York, he first played in public, a 13-minute improvisation that he later gave the title, ‘The Battle of Kurukshetra’ (the epic battle fought in the ‘Mahabharata’ between the Pandavas, representing the forces of good, and the Kauravas, the embodiment of darkness and ignorance).

On hearing recordings of his debut performance, numerous classical, jazz and contemporary musicians expressed awe at Sri Chinmoy's astonishing technical capacity; at his radical and uncanny rhythmic control and explosive dynamic power; but above all, at the compelling force of a relentless tidal-wave of inspiration.

Concert pianist Milton Kaye declared: "Sri Chinmoy has the stuff that music is made out of. Artists would kill for what Sri Chinmoy has!"

And what is that stuff? Leading New Age musician and composer Steven Halpern provides a clue:

A spiritual master such as Sri Chinmoy has established an inseparable oneness with this infinite Consciousness.

Most of the time, however, our own consciousness is very much on a finite level, a level largely determined by the inherent limitations of the mind. To enter into the infinite Consciousness requires first the transcendence of the limited, reasoning mind. To achieve this, one particularly effective vehicle is music.

Just as consciousness exists on many different levels, even so, different music will express and manifest these various levels, and be received and assimilated accordingly. Sri Chinmoy's music, performed spontaneously by one with no training, yet so overwhelming in its energy and directness, is clearly coming from a supramental stratum of consciousness, from somewhere quite beyond our normal human framework of perception.

"It is 'out of earth' music. It is cosmic music, beyond this galaxy. Sri Chinmoy's sense of harmony and rhythm is fantastic. You can hear all aspects of life. Nothing is planned. Sri Chinmoy's approach is the highest approach. You have to have the wisdom of the innermost Truth to play like this. Sri Chinmoy is doing what other musicians would like to but can't because they are so moulded. His music is the ultimate!"

Pianist Scott Cossu has sensed that Sri Chinmoy is leading the way for other musicians:

"Sri Chinmoy's piano music is crossing that border between the human element and the spiritual element. It's the connecting force. It's extremely challenging to speak the musical language Sri Chinmoy is speaking. It's a language of connection with God. This is so powerful that my words pale next to his music."

Composer Kalatit Baker sees this music as spiritual revelation: "Franz Liszt described the piano as 'the 88-note orchestra.' Now under the hands of Sri Chinmoy the piano has become 'the 88-note window of the Beyond.' Like water in a channel from a great ocean, notes cascade, race and flow with unlimited power, beauty and life energy. They are perfect in their revelation of experience beyond earth-experience and beyond the life we know."

When performing, Sri Chinmoy enters into a very high meditation, surrendering the limited consciousness of the mind to a higher force within. "I am not the doer," he says. "I don't bring it forth, it comes. It comes to the fore from within. Only I try to be a faithful instrument in all my activities. I have written considerably, I have spoken considerably, I have sung considerably and also I have composed considerably. Each of these activities I try to do as a devoted instrument of my Inner Pilot… My Inner Pilot executes His Will in and through me according to my power of receptivity."

The Inner Pilot can be seen as the dynamic, creative aspect of the Universal Consciousness. The artist serves here as a mirror wherein we glimpse the nature and workings of a common, higher state of Being, our true Self.

For most artists, inspiration is a fortuitous blessing, or the sporadic spoils of a desperate pursuit. For Sri Chinmoy: "Inspiration is like a flight of birds. When birds fly overhead, why should they land where you are? Why should they come to you? Since I am a spiritual Master, I can say, 'Stop here,' and they will stop."

While most artists labour for some time in the process of creation, for Sri Chinmoy creation itself is spontaneous. He has said that writing poetry is for him like drinking water. In his musical performance, Sri Chinmoy spans inspiration and articulation, vision and reality in one instant. There is no process involved in this music, no interpretation. It is the sheer joyous self-revelation of a state of absolute Being, of pure boundless consciousness.

The physical exertion and sheer stamina involved in Sri Chinmoy's performances is overwhelming. The speed and power of many passages make the most striking keyboard masterpieces seem timid by comparison.

Where did Sri Chinmoy acquire the monumental technique required to execute such daunting passages?

In his case, technique is not something separate from inspiration – the end and the means flow together as one spontaneous achievement. For as the spiritual pervades the physical, so too, to be completely one with the spiritual is to have total command of the physical. Utterly surrendered to the dictates of his Inner Pilot, Sri Chinmoy's physical body becomes a dynamo of pure energy, a lightning-rod to ground the clear light of Cosmic Vision…

When asked what he feels when playing music, Sri Chinmoy replied:

"It is not a matter of seeing or feeling. I only enjoy myself. At times I don't see or feel anything; only I become the music itself. I become Delight, Delight itself."

Sri Chinmoy calls his paintings "Jharna-Kala", Bengali for "Fountain Art", which gives a hint at the nature of the wellspring of his inspiration. When he paints, he says, "I become an instrument and just follow a streak of light. I see a streak of light and then I follow it."

The resulting paintings, often executed in a matter of seconds, hundreds at a time, seem almost to vibrate with living energy, witnesses to the vivid intensity and immediacy of the inner realms from whence they have sprung with such urgent inspiration.

This sense of urgency, of absolute commitment to an overwhelmingly powerful inner force or "Inner Pilot" also characterises Sri Chinmoy's keyboard improvisations. It is as though there is no intermediary, as though the listener is thrown directly into the ocean of light and power. Beyond the mind, where objectivity and separativity no longer exist, this music acts as a courier of inner Truth – a Truth to which we concord not in the mind but in our inmost being through a kind of inner thrill, the thrill of the finite embracing the Infinite… 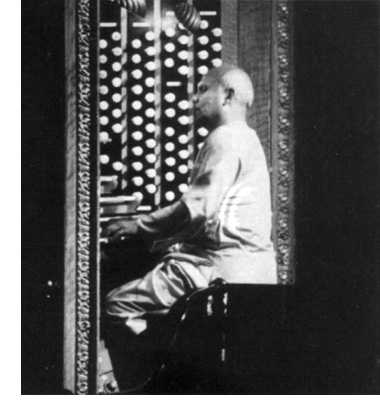 Performances on piano and synthesizer became a regular feature of the Master's concerts from early 1987. Then on the 26th of May, during a visit to Switzerland, Sri Chinmoy visited a church in Zurich and played on a new instrument, the pipe-organ. The 38-minute performance, entitled "The Summit-Song of Self-Transcendence", was to signal new, unprecedented heights in the Master's music- manifestation. It seemed he had found the ultimate vehicle for the musical expression of his teeming vision of universal omnipotence and omnipresence, the instrument, which he was already saying, made the grand piano seem like a child's toy!

Three days later Sri Chinmoy gave his first public performance on the pipe-organ, as part of a concert at London's Royal Albert Hall. Jenny Robb, composer and instructor at the Guildhall School of Music, described her reaction:

"I was completely agog… The organ playing was powerful, staggeringly powerful. It was a riveting, deeply moving experience!"

John Luxton, Head of the Keyboard Department at the Canberra School of Music, concurred:

"It's amazing, really amazing! This music is on another level. It made me feel that there are no boundaries; that I was tapping into a consciousness of the Infinite. Immensely powerful music! This is what music should be all about!"

It seems that not only had Sri Chinmoy found the ultimate instrument but, reciprocally, the pipe-organ had found its consummate player. The traditional role of the pipe-organ in churches has been to uplift the congregation – to turn the mind to contemplation of the power and grandeur of the Almighty, as the soul thrilled to the pipes' mysterious and mighty resonance. Now, in Sri Chinmoy's hands, the pipe-organ is itself thrilling to an intimate and direct revelation of mystical experience.

Following a remarkable performance on the famous organ in New York's Cathedral of St. John the Divine, Martin Smith, organist and Dean of the Manhattan School of Music, observed:

"Sri Chinmoy's spiritual depth of expression is so clear. His music speaks so clearly from within, from the deepest part of him. From the first note, it completely gathers your whole energy, your whole attention and holds it there.

This is the very purpose of music, according to Sri Chinmoy:

"Music means Self-expansion and oneness. The Self expands through music. The Self that expands is not the individual self but the unlimited Self."

Indeed, the ultimate significance of Sri Chinmoy's music lies in this capacity to transform our consciousness. As legendary jazz trumpeter, Don Cherry, has pointed out:

"To experience Sri Chinmoy's music would free a lot of people."

By revealing inner worlds far beyond the mind's domain, where time and space cease to exist, where there is only the constant play of pure power, light and ecstasy, our expanded consciousness is awakened, liberated from age-old limitations.

"Sri Chinmoy has understood that the essence of music has the power to move the soul in ways that words alone cannot. Combining his highly developed spirituality and his well-honed physique into one brilliant and expressive energy, the Guru projects the considerably unique power of music through performance that is perfect in its freedom from reservation and constriction.

"This is how he teaches with music; that is how he moves thousands at a time, through the superconscious, into that perfectly serene light of God's Peace… This is art of the highest order."

With music that is saturated in the highest consciousness, Sri Chinmoy is creating a revolutionary genre of music.

By investing his music with the ultimate task, the task of spiritual transformation, Sri Chinmoy is manifesting nothing less that a new, vibrant and compelling spiritual Teaching.

The music-world will never be the same again…

Endnote:
1 For Sri Chinmoy, February 18, 1987, marked the beginning of his piano career. He had, however, played piano on previous occasions. The earliest recorded instance is a public performance at a Christmas classical concert in Puerto Rico in 1974, when he played one of his own compositions.
View Photograph

This article was first published in 1987 in a booklet entitled, 'The Peace Concert with Sri Chinmoy'.