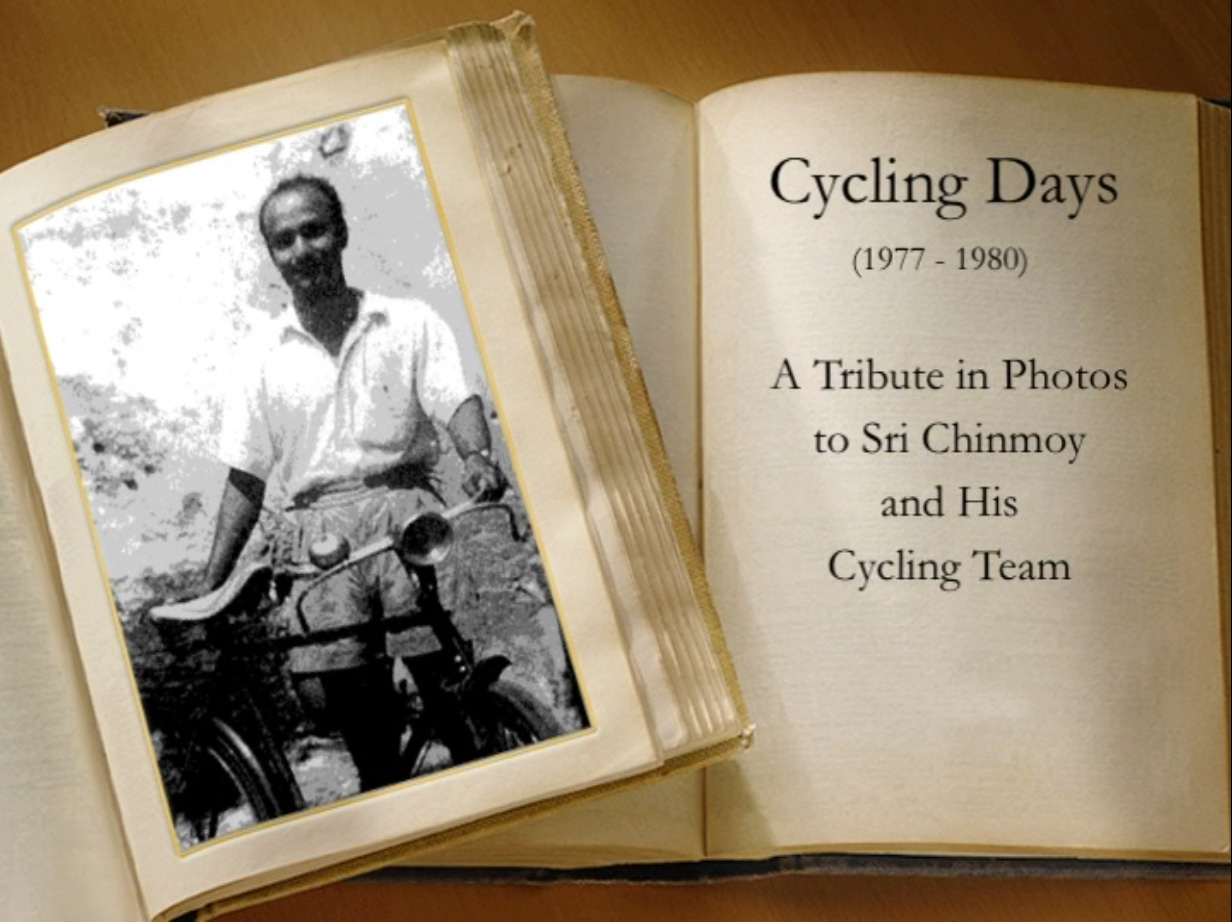 Many are familiar with his stellar athletic achievements, including his short- and long-distance running, and his contributions to the international running community through races staged by his marathon team. Some may know of his prowess as a tennis player. Others may have heard of his legendary weightlifting achievements, which he undertook at an age when most people would be enjoying retirement. Less known is Sri Chinmoy’s venture into long-distance bicycle riding.

Sri Chinmoy’s love of cycling dated back to when he was a young child growing up in Chittagong, a village then in East Bengal, India, now Bangladesh. Cycling also featured in Sri Chinmoy’s daily life at the Sri Aurobindo Ashram, in Pondicherry, India, where he lived and studied from the ages of 12 to 32.

For Sri Chinmoy, cycling was a metaphor for life. From the spiritual point of view, he said: “While we are cycling, we are reminding ourselves of evolution, of how the world is evolving in cycles. When we think of our planet, we think of a wheel turning; our life also is evolving like a wheel.”

In America, at the age of 45, Sri Chinmoy was inspired to take his cycling to a new level, participating in the annual 24-hour Pepsi Bicycle Marathon in New York City’s Central Park three years in a row. 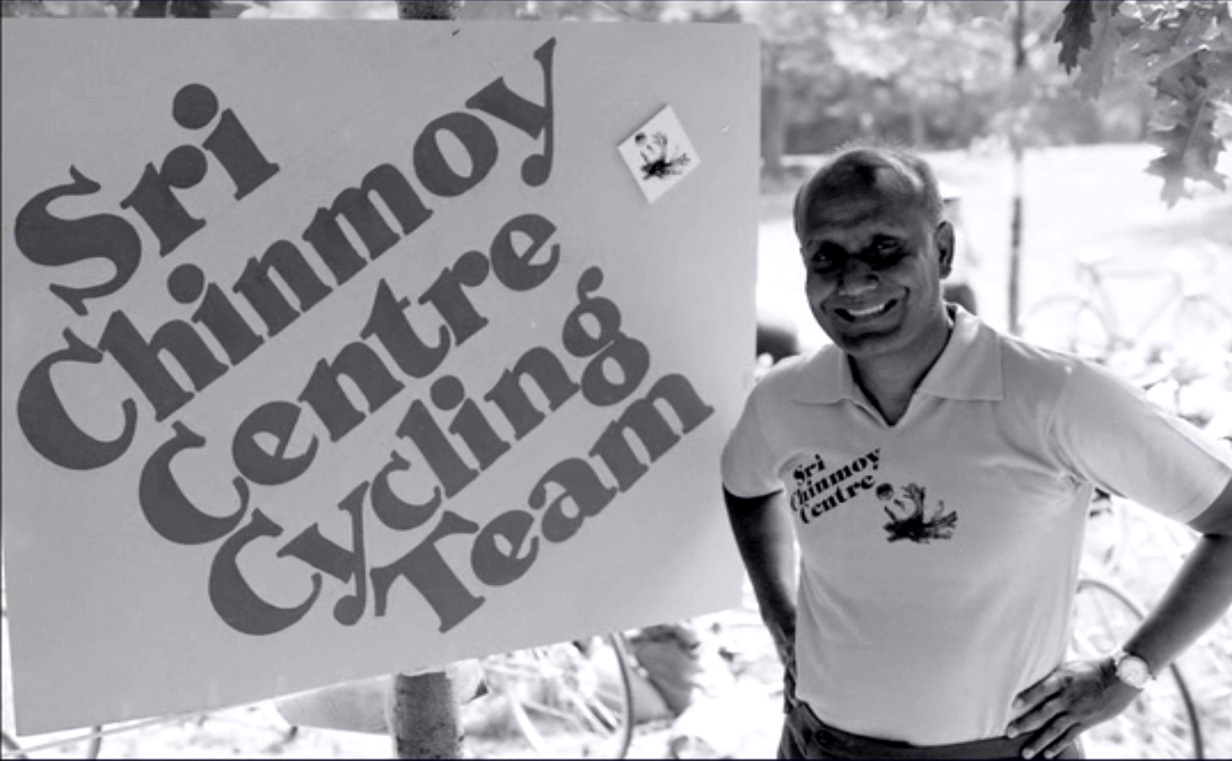 In the Spring of 1977, Sri Chinmoy invited his students to join in the adventure, and many did.

Training hard for the race himself, Sri Chinmoy inspired everyone who practised with him not only to get into better physical condition but also to strengthen their own qualities of perseverance, team spirit, the thirst for self-transcendence and the hunger to compete with oneself.

In the weeks leading up to the race, Sri Chinmoy imbued the training sessions with a thrill of excitement and joy. He attentively saw to every aspect of the preparations, even selecting the team uniform and ensuring there would be food and support for all the riders. As the race date approached Sri Chinmoy told his team: “Next week, it will be only you and your cycle. Give your heart and soul on that day. Nothing is as important as competing with your best effort.”

Sri Chinmoy and his 135-member team lined up with more than 9,000 other cyclists. Then they were off, under a hot midday sun. The marathon had begun! They rode from noon on Saturday to noon on Sunday, round and round the five-mile race course. Officials kept score, stamping the riders’ race bibs each time they completed a lap.

“The race itself was extremely difficult and dangerous,” according to team member Arpan DeAngelo. “There were many hills and thousands of people. We had to be extremely vigilant so as not to hit someone or be hit by someone else.”

Night fell and the team kept riding. Sri Chinmoy requested team members to form groups for safety along the dark, winding route. Braving painful leg cramps, Sri Chinmoy pressed on, leading a group of cyclists around the course all through the night, pausing only briefly for a moment’s relief.

At dawn, with the finish of the race just hours away, the team rode with renewed determination. As the clock ran down, Sri Chinmoy led the entire team in a final lap around the course. Bystanders applauded and cheered as the team crossed the finish line. A photo of the victory lap appeared in The New York Times the following day!

Sri Chinmoy went on to lead his team to two more bicycle marathons. In 1978, he achieved his personal best, riding a total of 230 miles (more than 370 kilometres)*. The team won prizes including best riding team (38,605 miles, or 62,129 kilometres), third place for men (Ashrita Furman) and first place for women (Pragati Pascale), not to mention, once again, best uniform!

In 1979, with his attention turned to long-distance running, Sri Chinmoy participated in one more cycling marathon, fielding his largest-ever team of 215 members. The team ended up capturing the third-place trophy in the men’s category (Arpan DeAngelo) and second and third place in the women’s category (Pragati Pascale and Nilima Silver, respectively).

* Adding to the inspiration of the day was the presence of Sri Chinmoy’s sister, Lily, visiting from India.


* By 1979, Sri Chinmoy’s athletic focus had turned to long-distance running. It is worth noting that before entering the bike marathon he had completed two 26.2 mile running marathons earlier the same month.

Beyond the 24-hour cycling events…

After six strenuous days, the team returned early in the morning of June 27th to a hero’s welcome at the Jamaica High School track (New York), greeted by Sri Chinmoy and scores of cheering spectators.

In a salute to the returning riders, Sri Chinmoy mounted his own bicycle and meditatively rode 15 times around the sweep of track encircling the relay team. In a further show of appreciation and gratitude, later in the day, Sri Chinmoy treated the triumphant cyclists to a delicious six-course meal that he himself had prepared for them.

A year later, in June 1980, a team of Sri Chinmoy’s students cycled across the entire United States in the impressive Sri Chinmoy USA Bicycle Relay. Sri Chinmoy joined the riders as they passed through the nation’s capital, Washington, D.C. These cycling adventures with Sri Chinmoy became opportunities for progress, physical and spiritual. He told his students:

“Here you are showing in boundless measure your physical capacity, your perseverance. Of all the qualities, perseverance stands foremost, not only in the spiritual life but also in the outer life.”

Many who were fortunate enough to experience that era with Sri Chinmoy have described their experiences as magical and transformative and have expressed an overwhelming sense of gratitude for all that Sri Chinmoy offered during those golden days.