In the recesses of my desk, there is a piece of paper I have kept for almost thirty-five years. It is a portion of a disposable serviette, the kind that usually has a life expectancy measured in minutes. However, this particular item has been imbued with a certain touch of immortality. Despite the relentless march of time and many moves on my part between continents, countries, states and cities, it has remained with me.

In the summer of that year, Sri Chinmoy visited Europe to offer a series of free talks on various aspects of the spiritual life. First stop in his busy itinerary was the northern English city of York, famous for its grand gothic cathedral — the largest in Northern Europe — York Minster. The venue for Sri Chinmoy’s lecture, however, was the much smaller Friends Meeting House in Friargate. 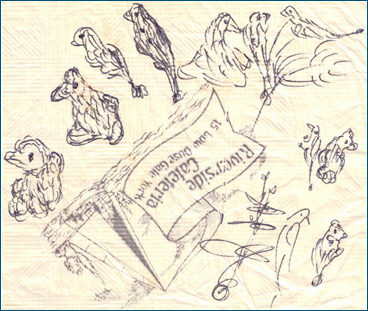 On the morning of his talk, Sri Chinmoy visited a nearby café — Riverside Cafeteria. And while waiting for his food to arrive, he began doodling on a serviette.

What he drew were clusters of birds and other tiny beings. Some were on branches, some in free flight; some stared with apprehension, others were confident in their cheerful play; some were feathered, as if insulated from the harsh realities of the world; and some were composed of the clean, swift strokes of a master draughtsman revealing with a few unfaltering lines, the essence of the soul in motion.

This was not the first time Sri Chinmoy had drawn these types of images. He would often do a quick sketch of a bird when signing his name or writing a message. They were not considered part of his formal artwork. Perhaps it was for this reason that he walked away from the table at the end of the meal leaving the serviette behind. Fortunately, Sushumna Mary Plumbly, leader of Sri Chinmoy’s London meditation centre at the time, picked it up, carefully folded it and put it away for safekeeping.

A few days later at her home in London, she revealed the treasured memento of Sri Chinmoy’s visit. The excitement welled in her eyes as she opened the folds of the precious artwork and displayed it in its entirety upon the table. Interestingly, the ink did not cross the fold marks, enabling it to be carefully torn into four equal portions without destroying the artwork. She kept one portion and presented three of us who were there on that occasion with a quarter. And so it was that the one became four — like the four points of a compass.

Holding my portion of the serviette in my hands now, it feels as light as a feather. The tissue itself has hardly any substance to it — time has dried and weathered its body and it now seems only to be held together by the lines of art upon its surface. It is so delicate, in fact, that I can almost imagine the tiny birds taking wing, transporting this vignette of physical reality back to a celestial abode. To me, this tiny tableau of birds on a 6x6-inch square of tissue holds impressions of the past as well as a vision of the future; it is a point in time and space where memory and destiny are able to spread out across the vast canvas of time.

Vivid memories of that day in York seem to be woven into the very texture of this small fragment of art: the modern sights and sounds of an ancient city; the age-long vision and meditative silence of a contemporary spiritual master.

In the late afternoon, we drove to Leeds and from there we began our journey back to London. I remember stopping at an Indian restaurant for dinner and then driving down the M1. It was a balmy summer’s evening and Sri Chinmoy was in a relaxed mood. He started to sing one song after another — ‘Ore Mor Kheya’, ‘Ekbar Shudhu Balo’ ...

The songs were in Bengali, a language so beautifully suited to the appointment of melody that translation is barely needed to appreciate the depth of feeling the songs convey. However, one song from that journey, ‘Hiya Pakhi’, vividly illustrates how much he identifies with the image of the bird as a symbol of spiritual freedom. Here is his own English translation:

O bird of my heart,

Whatever the world gives

Surely no one could have predicted that simple sketches like the ones Sri Chinmoy drew in York, would one day be transformed into an entirely new art form, one that would amaze and enchant art-lovers around the globe. In 1991, Sri Chinmoy began in earnest, drawing birds at a phenomenal rate. He never missed an opportunity to bring into creation the tiny soul-birds he loved so much and, in the decades that followed, he would draw more than 16 million of them. They have been exhibited in prestigious galleries the world over and have been accorded acclaim by all who view them.

Sri Chinmoy’s soulful bird drawings have proven their ability to transcend time and place. The inspiration they carry will continue to expand far into the future. I, therefore, place this delicate page of sketches back into the book of history, evidence that even in those early days the pen of the artist was never still; it was always ready to capture the beauty of inspiration, wherever he happened to be, using whatever resources he had to hand.