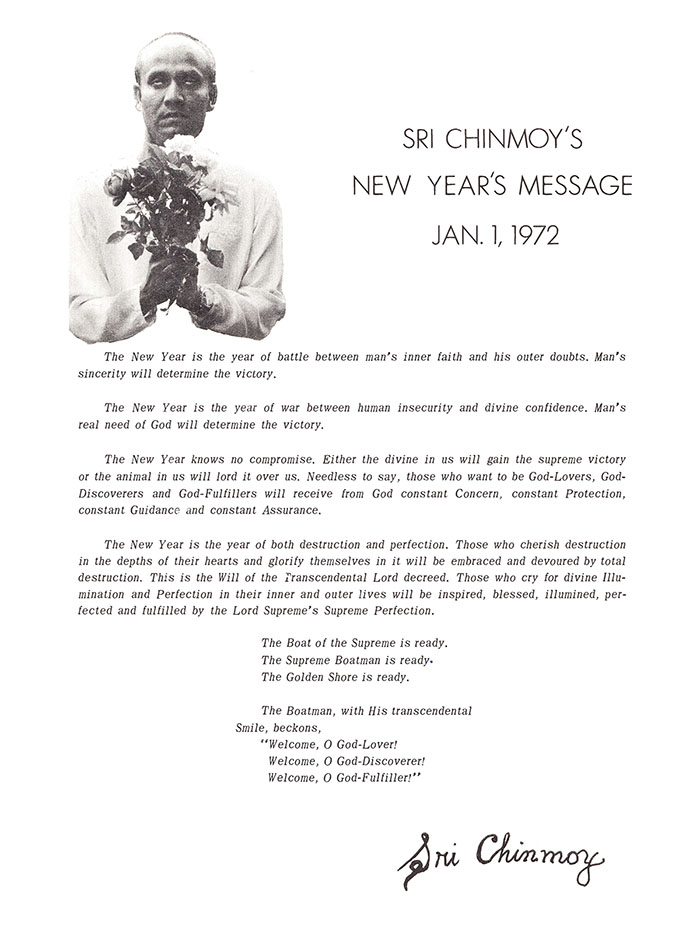 The New Year is the year of battle between man's inner faith and his outer doubts. Man's sincerity will determine the victory.

The New Year is the year of war between human insecurity and divine confidence. Man's real need of God will determine the victory.

The New Year knows no compromise. Either the divine in us will gain the supreme victory or the animal in us will lord it over us. Needless to say, those who want to be God-Lovers, God-Discoverers and God-Fulfillers will receive from God constant Concern, constant Protection, constant Guidance and constant Assurance.

The New Year is the year of both destruction and perfection. Those who cherish destruction in the depths of their hearts and glorify themselves in it will be embraced and devoured by total destruction. This is the Will of the Transcendental Lord decreed. Those who cry for divine Illumination and Perfection in their inner and outer lives will be inspired, blessed, illumined, perfected and fulfilled by the Lord Supreme's Supreme Perfection.

This message appears for the first time in print in the January 1972 edition of AUM Magazine. A later version, with slight editorial changes, is published in New Year’s Messages from Sri Chinmoy, 1966-1994.

A few days before the New Year began, Sri Chinmoy gives a general talk about ‘The soul of a year’, in which he describes the qualities of 1971 and 1972.