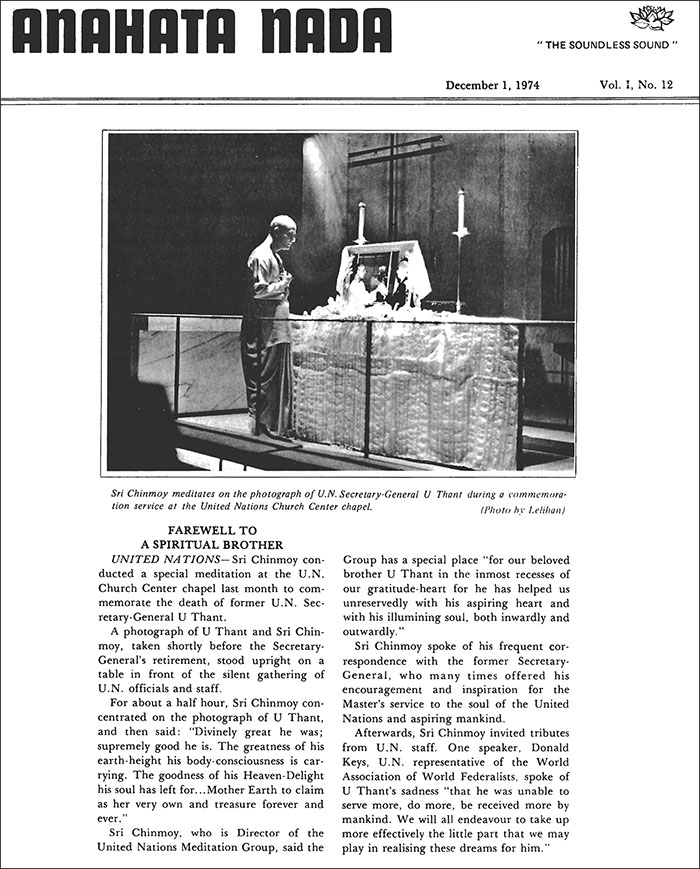 FAREWELL TO A SPIRITUAL BROTHER

A photograph of U Thant and Sri Chinmoy, taken shortly before the Secretary-General’s retirement, stood upright on a table in front of the silent gathering of U.N. officials and staff.

For about a half hour, Sri Chinmoy concentrated on the photograph of U Thant, and then said: “Divinely great he was; supremely good he is. The greatness of his earth-height his body-consciousness is carrying. The goodness of his Heaven-Delight his soul has left for ... Mother Earth to claim as her very own and treasure forever and ever.”

Sri Chinmoy, who is Director of the United Nations Meditation Group, said the Group has a special place “for our beloved brother U Thant in the inmost recesses of our gratitude-heart for he has helped us unreservedly with his aspiring heart and with his illumining soul, both inwardly and outwardly.”

Sri Chinmoy spoke of his frequent correspondence with the former Secretary-General, who many times offered his encouragement and inspiration for the Master’s service to the soul of the United Nations and aspiring mankind.

Afterwards, Sri Chinmoy invited tributes from U.N. staff. One speaker, Donald Keys, U.N. representative of the World Association of World Federalists, spoke of U Thant’s sadness “that he was unable to serve more, do more, be received more by mankind. We will all endeavour to take up more effectively the little part that we may play in realising these dreams for him.”

Sri Chinmoy meditates on the photograph of U.N. Secretary-General U Thant during a commemoration service at the United Nations Church Center chapel. Photo by Lelihan

“The presence of Sri Chinmoy on The Way to Go was inspirational, I am certain, to our viewers. To me, personally, his presence was transforming. I look upon the visit as the highlight of the twenty-two-and-one-half years of the program’s life.” — Ormond Drake