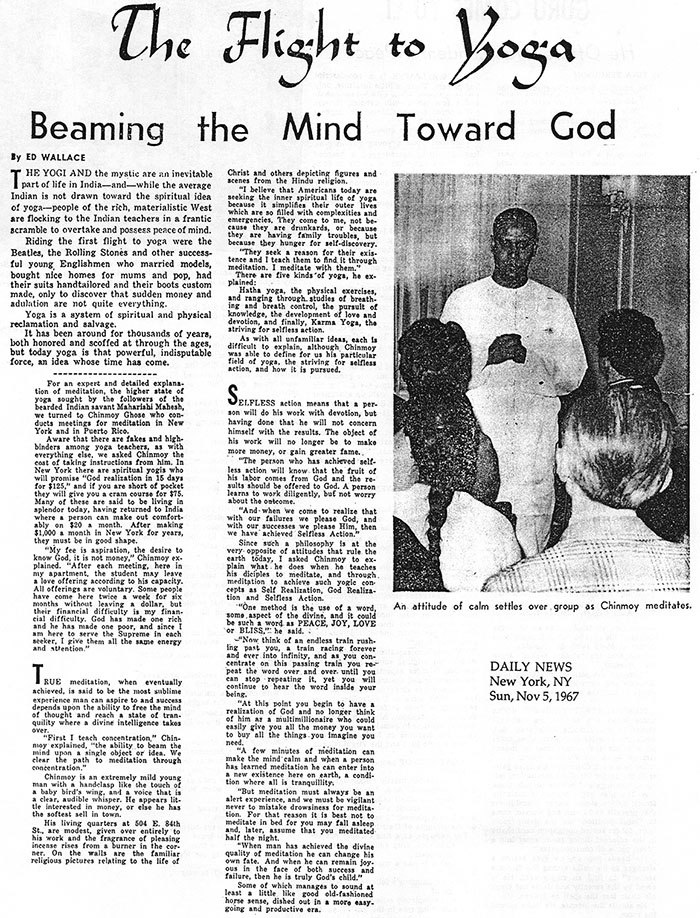 The first feature article about Sri Chinmoy, published in mainland USA, appears in the National Edition of the Sunday News, which has the largest circulation of any New York newspaper.

The Flight to Yoga

Beaming the Mind Toward God

THE YOGI AND the mystic are an inevitable part of life in India — and — while the average Indian is not drawn toward the spiritual idea of yoga — people of the rich, materialistic West are flocking to the Indian teachers in a frantic scramble to overtake and possess peace of mind.

Riding the first flight to yoga were the Beatles, the Rolling Stones and other successful young Englishmen who married models, bought nice homes for mums and pop, had their suits handtailored and their boots custom made, only to discover that sudden money and adulation are not quite everything.

Yoga is a system of spiritual and physical reclamation and salvage.

It has been around for thousands of years, both honored and scoffed at through the ages, but today yoga is that powerful, indisputable force, an idea whose time has come.

For an expert and detailed explanation of meditation, the higher state of yoga sought by the followers of the bearded Indian savant Maharishi Mahesh, we turned to Chinmoy Ghose who conducts meetings for meditation in New York and in Puerto Rico.

Aware that there are fakes and highbinders among yoga teachers, as with everything else, we asked Chinmoy the cost of taking instructions from him. In New York there are spiritual yogis who will promise “God realization in 15 days for $125,” and if you are short of pocket they will give you a cram course for $75.

Many of these are said to be living in splendor today, having returned to India where a person can make out comfortably on $20 a month. After making $1,000 a month in New York for years, they must be in good shape.

“My fee is aspiration, the desire to know God; it is not money,” Chinmoy explained. “After each meeting, here in my apartment, the student may leave a love offering according to his capacity. All offerings are voluntary. Some people have come here twice a week for six months without leaving a dollar, but their financial difficulty is my financial difficulty. God has made one rich and He has made one poor, and since I am here to serve the Supreme in each seeker, I give them all the same energy and attention.”

True meditation, when eventually achieved, is said to be the most sublime experience man can aspire to and success depends upon the ability to free the mind of thought and reach a state of tranquillity where a divine intelligence takes over.

“First I teach concentration,” Chinmoy explained, “the ability to beam the mind upon a single object or idea. We clear the path to meditation through concentration.”

Chinmoy is an extremely mild young man with a handclasp like the touch of a baby bird’s wing, and a voice that is a clear, audible whisper. He appears little interested in money, or else he has the softest sell in town.

His living quarters at 504 E. 84th St. are modest, given over entirely to his work and the fragrance of pleasing incense rises from a burner in the corner. On the walls are the familiar religious pictures relating to the life of Christ and others depicting figures and scenes from the Hindu religion.

“I believe that Americans today are seeking the inner spiritual life of yoga because it simplifies their outer lives which are so filled with complexities and emergencies. They come to me, not because they are drunkards, or because they are having family troubles, but because they hunger for self-discovery.

“They seek a reason for their existence and I teach them to find it through meditation. I meditate with them.”

There are five kinds of yoga, he explained:

Hatha yoga, the physical exercises, and ranging through studies of breathing and breath control, the pursuit of knowledge, the development of love and devotion, and finally, Karma Yoga, the striving for selfless action.

As with all unfamiliar ideas, each is difficult to explain, although Chinmoy was able to define for us one aspect of his particular field of yoga, the striving for selfless action, and how it is pursued.

Selfless action means that a person will do his work with devotion, but having done that he will not concern himself with the results. The object of his work will no longer be to make more money, or gain greater fame.

“The person who has achieved selfless action will know that the fruit of his labor comes from God and the results should be offered to God. A person learns to work diligently, but not worry about the outcome.

“And when we come to realize that with our failures we please God, and with our successes we please Him, then we have achieved Selfless Action.”

Since such a philosophy is at the very opposite of attitudes that rule the earth today, I asked Chinmoy to explain what he does when he teaches his disciples to meditate, and through meditation to achieve such yogic concepts as Self-Realization, God-Realization and Selfless Action.

“One method is the use of a word, some aspect of the divine, and it could be such a word as PEACE, JOY, LOVE or BLISS,” he said.

“Now think of an endless train rushing past you, a train racing forever and ever into infinity, and as you concentrate on this passing train you repeat the word over and over until you can stop repeating it, yet you will continue to hear the word inside your being.

“At this point you begin to have a realization of God and no longer think of him as a multimillionaire who could easily give you all the money you want to buy all the things you imagine you need.

“A few minutes of meditation can make the mind calm and when a person has learned meditation he can enter into a new existence here on earth, a condition where all is tranquillity.

“But meditation must always be an alert experience, and we must be vigilant never to mistake drowsiness for meditation. For that reason it is best not to meditate in bed for you may fall asleep and, later, assume that you meditated half the night.

“When man has achieved the divine quality of meditation he can change his own fate. And when he can remain joyous in the face of both success and failure, then he is truly God’s child.”

Some of which manages to sound at least a little like good old-fashioned horse sense, dished out in a more easy-going and productive era.

An attitude of calm settles over group as Chinmoy meditates.