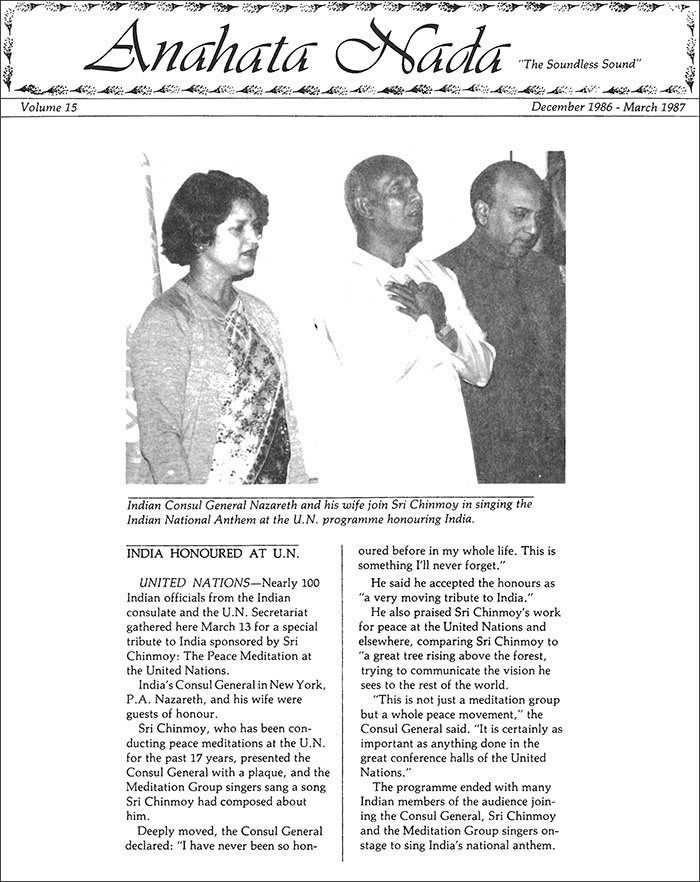 UNITED NATIONS — Nearly 100 Indian officials from the Indian consulate and the U.N. Secretariat gathered here March 13 for a special tribute to India sponsored by Sri Chinmoy: The Peace Meditation at the United Nations.

India’s Consul General in New York, P.A. Nazareth, and his wife were guests of honour.

Sri Chinmoy, who has been conducting peace meditations at the U .N. for the past 17 years, presented the Consul General with a plaque, and the Meditation Group singers sang a song Sri Chinmoy had composed about him.

Deeply moved, the Consul General declared: “I have never been so honoured before in my whole life. This is something I’ll never forget.”

He said he accepted the honours as “a very moving tribute to India.”

He also praised Sri Chinmoy’s work for peace at the United Nations and elsewhere, comparing Sri Chinmoy to “a great tree rising above the forest, trying to communicate the vision he sees to the rest of the world.

“This is not just a meditation group but a whole peace movement,” the Consul General said. “It is certainly as important as anything done in the great conference halls of the United Nations.”

The programme ended with many Indian members of the audience joining the Consul General, Sri Chinmoy and the Meditation Group singers onstage to sing India’s national anthem.