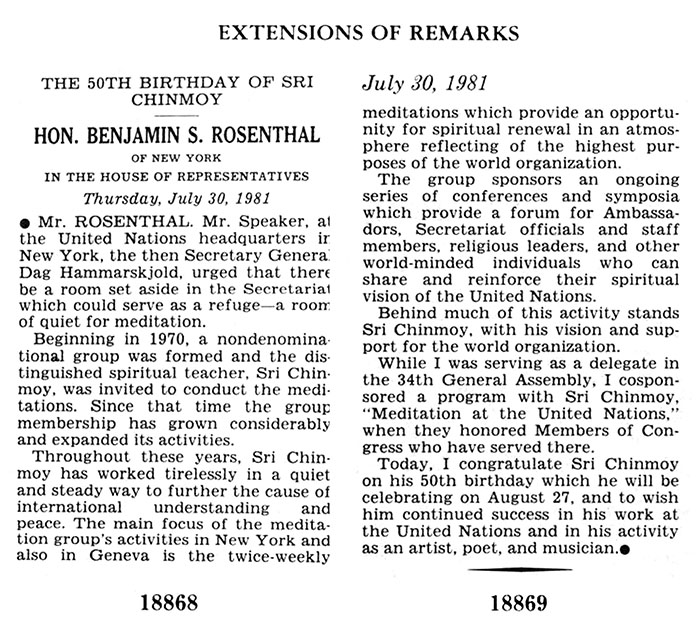 THE 50TH BIRTHDAY OF SRI CHINMOY

OF NEW YORK
IN THE HOUSE OF REPRESENTATIVES
Thursday, July 30, 1981

• Mr. ROSENTHAL. Mr. Speaker, at the United Nations headquarters in New York, the then Secretary-General Dag Hammarskjold, urged that there be a room set aside in the Secretariat which could serve as a refuge—a room of quiet for meditation.

Beginning in 1970, a nondenominational group was formed and the distinguished spiritual teacher, Sri Chinmoy, was invited to conduct the meditations. Since that time the group membership has grown considerably and expanded its activities.

Throughout these years, Sri Chinmoy has worked tirelessly in a quiet and steady way to further the cause of international understanding and peace. The main focus of the meditation group’s activities in New York and also in Geneva is the twice-weekly meditations which provide an opportu­nity for spiritual renewal in an atmos­phere reflecting of the highest pur­poses of the world organization.

The group sponsors an ongoing series of conferences and symposia which provide a forum for Ambassa­dors, Secretariat officials and staff members, religious leaders, and other world-minded individuals who can share and reinforce their spiritual vision of the United Nations.

Behind much of this activity stands Sri Chinmoy, with his vision and support for the world organization.

While I was serving as a delegate in the 34th General Assembly, I cospon­sored a program with Sri Chinmoy, "Meditation at the United Nations," when they honored Members of Con­gress who have served there.

Today, I congratulate Sri Chinmoy on his 50th birthday which he will be celebrating on August 27, and to wish him continued success in his work at the United Nations and in his activity as an artist, poet, and musician.•