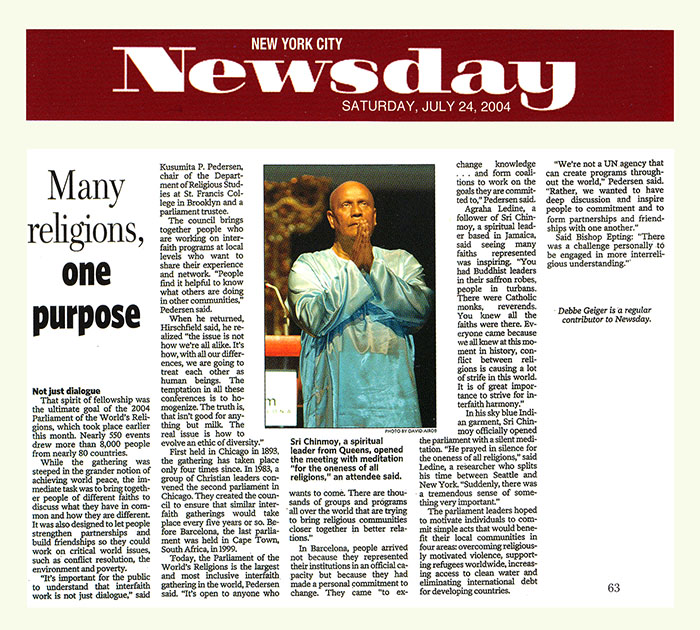 Many religions, one purpose

That spirit of fellowship was the ultimate goal of the 2004 Parliament of the World’s Religions, which took place earlier this month. Nearly 550 events drew more than 8,000 people from nearly 80 countries.

While the gathering was steeped in the grander notion of achieving world peace, the immediate task was to bring together people of different faiths to discuss what they have in common and how they are different. It was also designed to let people strengthen partnerships and build friendships so they could work on critical world issues, such as conflict resolution, the environment and poverty.

“It’s important for the public to understand that interfaith work is not just dialogue,” said Kusumita P. Pedersen, chair of the Department of Religious Studies at St. Francis College in Brooklyn and a parliament trustee.

The council brings together people who are working on interfaith programs at local levels who want to share their experience and network. “People find it helpful to know what others are doing in other communities,” Pedersen said.

When he returned, Hirschfield said, he realized “the issue is not how we’re all alike. It’s how, with all our differences, we are going to treat each other as human beings. The temptation in all these conferences is to homogenize. The truth is, that isn’t good for anything but milk. The real issue is how to evolve an ethic of diversity.”

First held in Chicago in 1893, the gathering has taken place only four times since. In 1983, a group of Christian leaders convened the second parliament in Chicago. They created the council to ensure that similar interfaith gatherings would take place every five years or so. Before Barcelona, the last parliament was held in Cape Town, South Africa, in 1999.

Today, the Parliament of World’s Religions is the largest and most inclusive interfaith gathering in the world, Pedersen said. “It’s open to anyone who wants to come. There are thousands of groups and, programs all over the world that are trying to bring religious communities closer together in better relations.”

In Barcelona, people arrived not because they represented their institutions in an official capacity but because they had made a personal commitment to change. They came “to exchange knowledge ... and form coalitions to work on the goals they are committed to,” Pedersen said.

Agraha Levine, a follower of Sri Chinmoy, a spiritual leader based in Jamaica, said seeing many faiths represented was inspiring. “You had Buddhist leaders in their saffron robes, people in turbans. There were Catholic monks, reverends. You knew all the faiths were there. Everyone came because we all knew at this moment in history, conflict between religions is causing a lot of strife in this world. It is of great importance to strive for interfaith harmony.”

In his sky blue Indian garment, Sri Chinmoy officially opened the parliament with a silent meditation. “He prayed in silence for the oneness of all religions,” said Levine, a researcher who splits his time between Seattle and New York. “Suddenly, there was a tremendous sense of something very important.”

“We’re not a UN agency that can create programs throughout the world,” Pedersen said. “Rather, we wanted to have deep discussion and inspire people to commitment and to form partnerships and friendships with one another.” Said Bishop Epting: “There was a challenge personally to be engaged in more interreligious understanding.”

• Debbe Geiger is a regular contributor to Newsday.

Sri Chinmoy, a spiritual leader from Queens, opened the meeting with meditation “for the oneness of all religions,” an attendee said.;