After a relentless two-year lecture tour of America following on from his historic address to the Parliament of the World’s Religions, Swami Vivekananda spent seven weeks at a cottage retreat on the island in the summer of 1895, and on the morning of the last day of his visit, 7 August, he walked with his disciples about half a mile from the cottage to meditate in the forest, and there he entered into Nirvikalpa Samadhi.

Seventy years later, Sri Chinmoy did the same —  leading a small group of his disciples to the exact spot (pictured below) where Swami Vivekananda had meditated. There, Sri Chinmoy himself enters into Nirvikalpa Samadhi. The actual location, not known to the public, is obscured by dense undergrowth.

When I went to Thousand Island Park, I sat at a place where they said that Swami Vivekananda had sat. I was not getting any vibration from that place. I entered into my highest. Then I saw another place nearby, and there I sat. I said, “This is the place.” It is not more than one hundred or two hundred metres away. There I got Swami Vivekananda's full vibration. Then I went to see the small house where he stayed.

Published in The Path of My Inner Pilot

An interesting event took place when Swami Vivekananda was staying in a cottage at Thousand Island Park. It was a dark and rainy night. Two ladies from Detroit had travelled hundreds of miles to find him there.

Having met him, one of them humbly spoke out, "We have come to you just as we would go to Jesus if he were still on earth and ask him to teach us."

Swami Vivekananda, deeply moved and overwhelmed with humility, replied, "If only I possessed the power of Christ to set you free now!"

When Swami Vivekananda returned home from his trip abroad, he travelled by steamer from Naples to Colombo, Sri Lanka, where he was given an overwhelming reception. He then made his way to his native land and finally reached Madras. Everywhere he went, he was hailed by multitudes.

When Swami Vivekananda arrived in Calcutta after his triumph in America, there was a big meeting. In front of thousands of people, his brother disciple, Swami Brahmananda, touched his feet and garlanded him.

Vivekananda said to him, "What are you doing, what are you doing?" Brahmananda replied in Bengali, "You are my elder brother, so you are like my father. That is why I am bowing to you."

Then Vivekananda touched Brahmananda's feet and said, "The son of the Guru is like the Guru himself."

So both of them were bowing to each other in front of thousands of people.

When Sri Ramakrishna examined the young Naren's palm, he said, "O God, you are not going to live for a long time. You will not have a long life."

Then, when Swami Vivekananda reached the age of thirty-nine, he said, "I will not cross the barrier of forty. I do not want to live. My time has come."

He kept his promise. He passed away at the age of thirty-nine years and five months. He had worked extremely hard while he was on earth. He suffered a lot. So when his time came, he wanted to leave. His great destiny was to die before forty. Can you imagine? And we do not even start our life before forty!

When Swami Vivekananda left the body, on 4 July 1902, nobody, nobody cried as bitterly as Swami Brahmananda. Brahmananda said, "Now I have lost everything. In you, I found my brother, father, everything. Now I have lost all. How could you go and leave me alone? Today you have made me helpless, helpless."

Then he literally jumped on Vivekananda's dead body, crying and crying like a little child.

Every morning, starting at five o'clock or so, Sister Nivedita used to only repeat Swami Vivekananda's name. When he died, she did not want to live. As they were cremating his body, she was about thirty metres away. She was not near the pyre at all. She was sitting on the ground, crying bitterly. Suddenly, a burning charcoal flew up and landed in her lap. How it came there, nobody knows, but it flew to her and fell on her lap.

Nivedita said, "He has come to console me."

On the day Swami Vivekananda passed away, everyone was swimming in the sea of tears. His physical mother, Bhubaneshwari Devi, cried a little. Then she said something truly immortal:

"I am ready to give birth again and again to a hero like my son. He came into the world to raise the consciousness of the world. He has died at such a tender age, but I do not mind because my son has played his role. I know that he was not for me alone. He was for the whole world. He has helped the world so much."

Published in Transfiguration and Other Stories 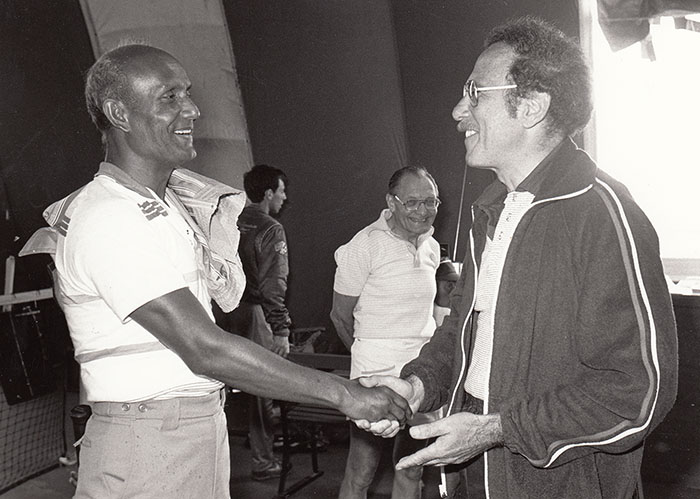