A window on Sri Chinmoy’s life and contributions
ARTWORKS

News as it happened in print, radio and TV
MUSIC

Honours and awards given and received.
WRITINGS 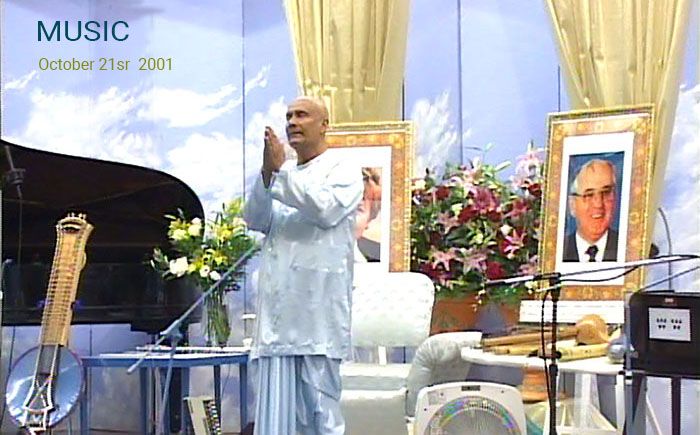 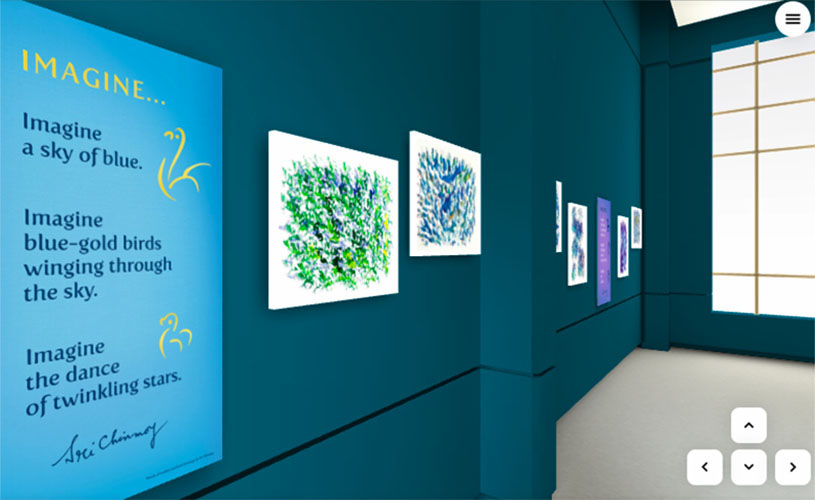 Sri Chinmoy’s meditations at the UN in New York

From the pen of the Master

Collections from our
photographic archives

Articles from writers
around the world

VIDEO OF THE MONTH

Sri Chinmoy relaxes at a function with his disciples in Rome, Italy. Printed replicas of his artworks decorate the stage setting. 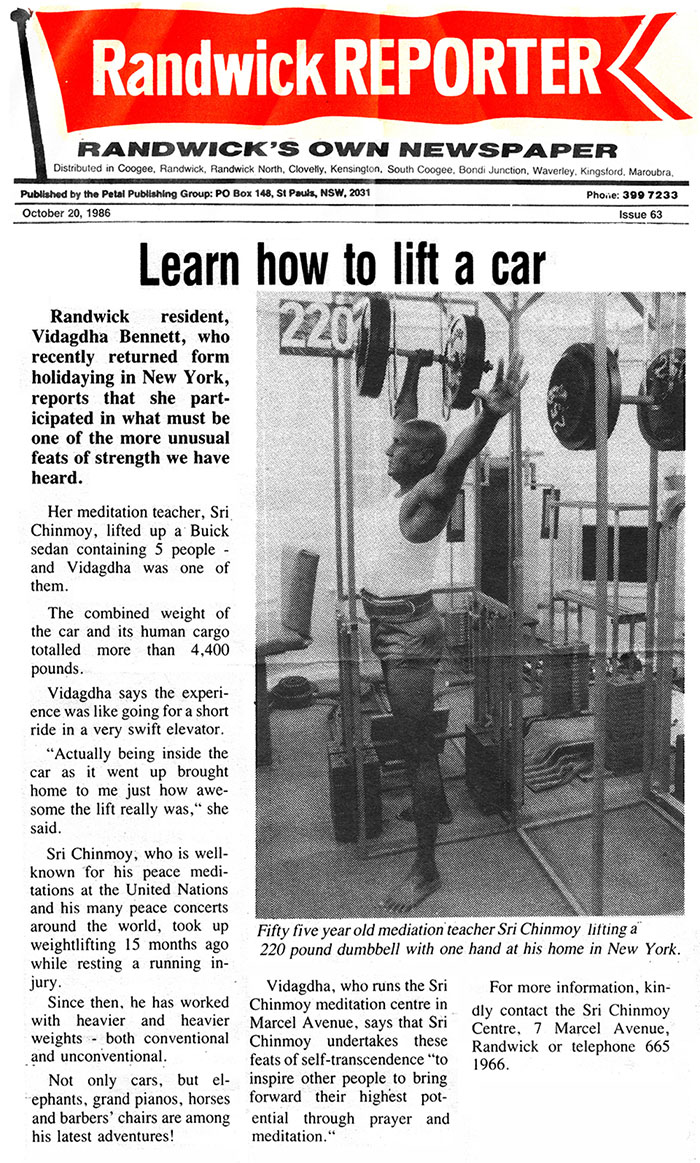 Learn how to lift a car

Randwick resident, Vidagdha Bennett, who recently returned from holidaying in New York, reports that she participated in what must be one of the more unusual feats of strength we have heard.

Her meditation teacher, Sri Chinmoy, lifted up a Buick sedan containing 5 people and Vidagdha was one of them.

The combined weight of the car and its human cargo totalled more than 4,400 pounds.

Vidagdha says the experience was like going for a short ride in a very swift elevator.

“Actually being inside the car as it went up brought home to me just how awesome the lift really was,” she said.

Sri Chinmoy, who is well-known for his peace meditations at the United Nations and his many peace concerts around the world, took up weightlifting 15 months ago while resting a running injury.

Since then, he has worked with heavier and heavier weights — both conventional and unconventional. Not only cars, but elephants, grand pianos, horses and barbers’ chairs are among his latest adventures!

Vidagdha, who runs the Sri Chinmoy meditation centre in Marcel Avenue, says that Sri Chinmoy undertakes these feats of self-transcendence “to inspire other people to bring forward their highest potential through prayer and meditation.”

Fifty-five-year-old meditation teacher Sri Chinmoy lifting a 220-pound dumbbell with one hand at his home in New York.

Sri Chinmoy offers a Peace Concert at the Eiffel Tower in Paris, France.

Sri Chinmoy meditates during a boat trip as it passes by the Eiffel Tower along the River Seine in Paris. 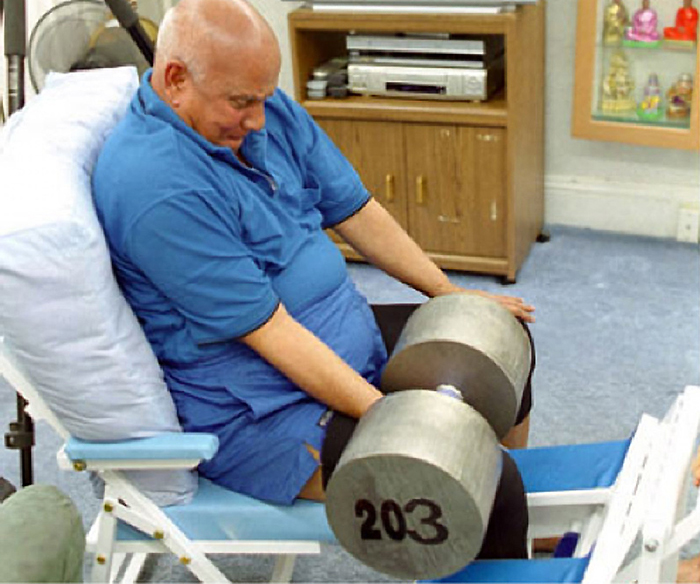 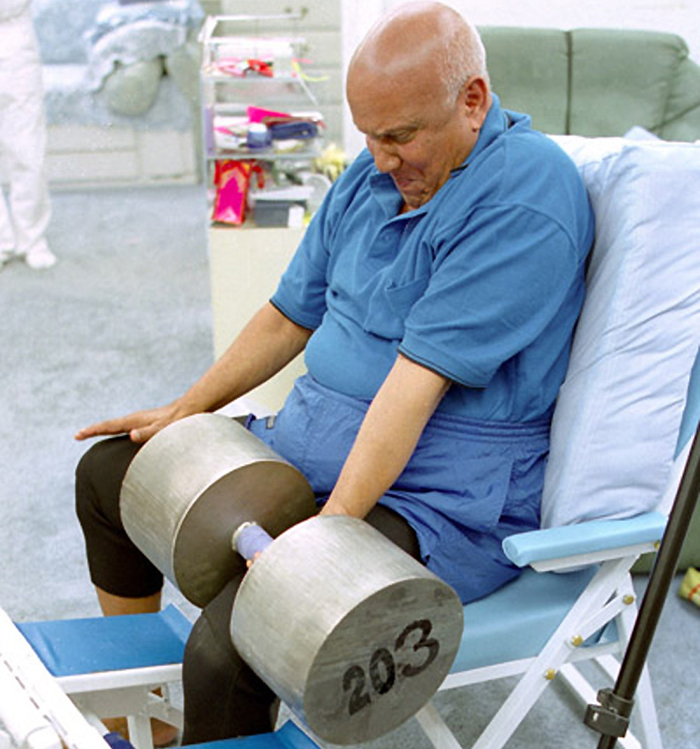 “At this ripe old age of 74, I live in the heart. And God, who is my Inner Pilot, commands me, inspires me and guides me while I am lifting such heavy weights.… My Inner Pilot is my inspiration, he is my aspiration and he is my protection.” — Sri Chinmoy

Per Sandberg, a Member of the Norwegian Parliament, visits Sri Chinmoy at Aspiration-Ground in Jamaica, Queens, New York. 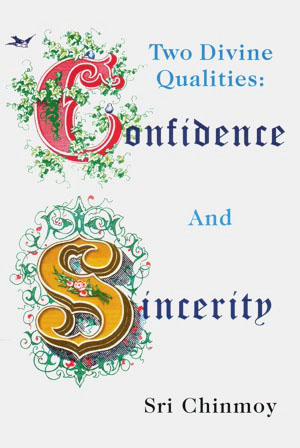